Whose world is this? The World is Ours. Together students will work thru a Beta version of BUFUs latest experimental model on organizing WYFY - a project seeking to invite us to rethinking how we build space online// IRL for our most equitable future. We will also participate in various meditative exercises to exorcize technology.

On Day 6 we were joined by Tsige Tafesse and Katherine Tom of By Us For Us (BUFU), for a knowledge share on how to critically (re)engage the ways that we establish and inhabit spaces online and IRL. We started by reading BUFU’s Community Guidelines and sharing how certain codes of conduct landed with us before talking about the history of BUFU. 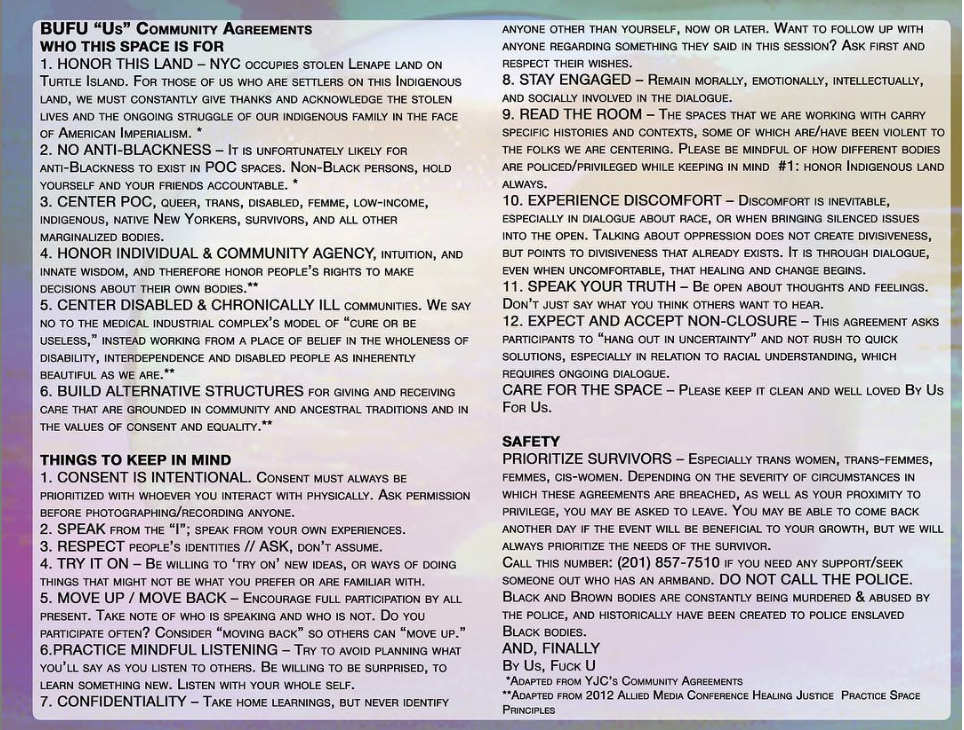 Since the collective’s inception in September of 2015, institutions have been trying to define BUFU and render them legible. Are they an art collective? Are they a technology collaborative? Do they throw parties too? Why did someone give them a warehouse? BUFU has never identified themselves as an art collective, a technology collaborative, or whatever - but it is a long-standing tradition for the press, media, art and academic institutions to read whatever they want from queer, femme and non-binary, Black and Asian bodies rather than let them define themselves.

BUFU IS A COLLABORATIVE LIVING ARCHIVE CENTERED AROUND (PAN)BLACK AND (PAN)ASIAN CULTURAL AND POLITICAL RELATIONSHIPS. WE, THE FOUNDERS OF THIS PROJECT, ARE A COLLECTIVE OF QUEER, FEMME AND NON-BINARY, BLACK AND EAST-ASIAN ARTISTS AND ORGANIZERS. OUR GOAL IS TO FACILITATE A GLOBAL CONVERSATION ON THE RELATIONSHIP BETWEEN BLACK AND ASIAN DIASPORAS, WITH AN EMPHASIS ON BUILDING SOLIDARITY, DE-CENTERING WHITENESS, AND RESURFACING OUR DEEPLY INTERCONNECTED AND COMPLICATED HISTORIES. WE ATTEMPT TO ACHIEVE THIS THROUGH OUR COLLABORATIVE PROGRAMMING, OUR VISUAL ARCHIVES, AND THROUGH BUILDING LONG-TERM PARTNERSHIPS WITH COLLECTIVES, ORGANIZATIONS, AND INDIVIDUALS.

The members of BUFU came together during their time at an institution that remained unnamed, irrelevant. Following a screening of Mountains That Take Wing-Angela Davis & Yuri Kochiyama: A Conversation on Life, Struggles & Liberation, they struggled to find a language through which to talk about Black and Asian solidarity and all the tensions and nuances surrounding what that can or should look like. From this tension came a documentary project on Black and Asian diasporas that has taken them to Japan, Jamaica, Korea, China, Ethiopia, and across the United States. They were very generous to share with us a cut from their forthcoming documentary that they will take on tour later this year.

Alongside this documentary project, BUFU also developed an entire grassroots organizing movement that has led to the manifestation of events across all 5 boroughs of New York and residencies at Eyebeam and China Residencies - using their illegibility as a tool to garner access to resoures from institutions around the world. Since 2013 BUFU has moved through many models of organizing, from their first warehouse space in Clinton Hill to their recent residency within a residency, Eyedream. Different models that are all entangled in visions of building long term intimacies, transforming spaces not necessarily built for them and creating new entry points for other to come in where they fit in, expanding the conversation about racialization and solidarity beyond Black and Asian diasporas.

Our first activity was to take a few moments to write - analog, on pen and paper, about whatever thought particles were settling after our conversation or with this prompt if we needed it: How are you coming into a relationship with technology? What are some of the times you have experienced a beautiful connection due to online space? What are sometimes when you felt a block, anxiety or challenge in connection with online space?

After writing we were asked to spend some time on our phones with an observer taking notice of how our body dynamics changed or did not change. The observer noticed that I slouch in the same way regardless of whether I’m writing or on my phone - which I guess is a cue that I have trash posture - and that everyone seemed to be cradling their phones like tiny phone babies. Other folks in the room reported feeling like a troll hunched over their device or a narrowing of their peripheral vision, with the rest of the world filtered out, all that was left was their phone. What about you, reader? Stop and notice how you’re feeling as you read this. Is there tension in your face? Are your eyes straining? Is your body comfortable in whatever position it’s in?

In our final activity, Kat and Tsige challenged us to come up with three Codes of Conducts in pairs, then to link up with another pair and widdle our 6 CoCs into 3, then to link up with another group of 4 and so on until we were divided up into two large groups with 3 CoCs each. By the end of the activity we had created tangible codes of conduct that we could all hold and touch. 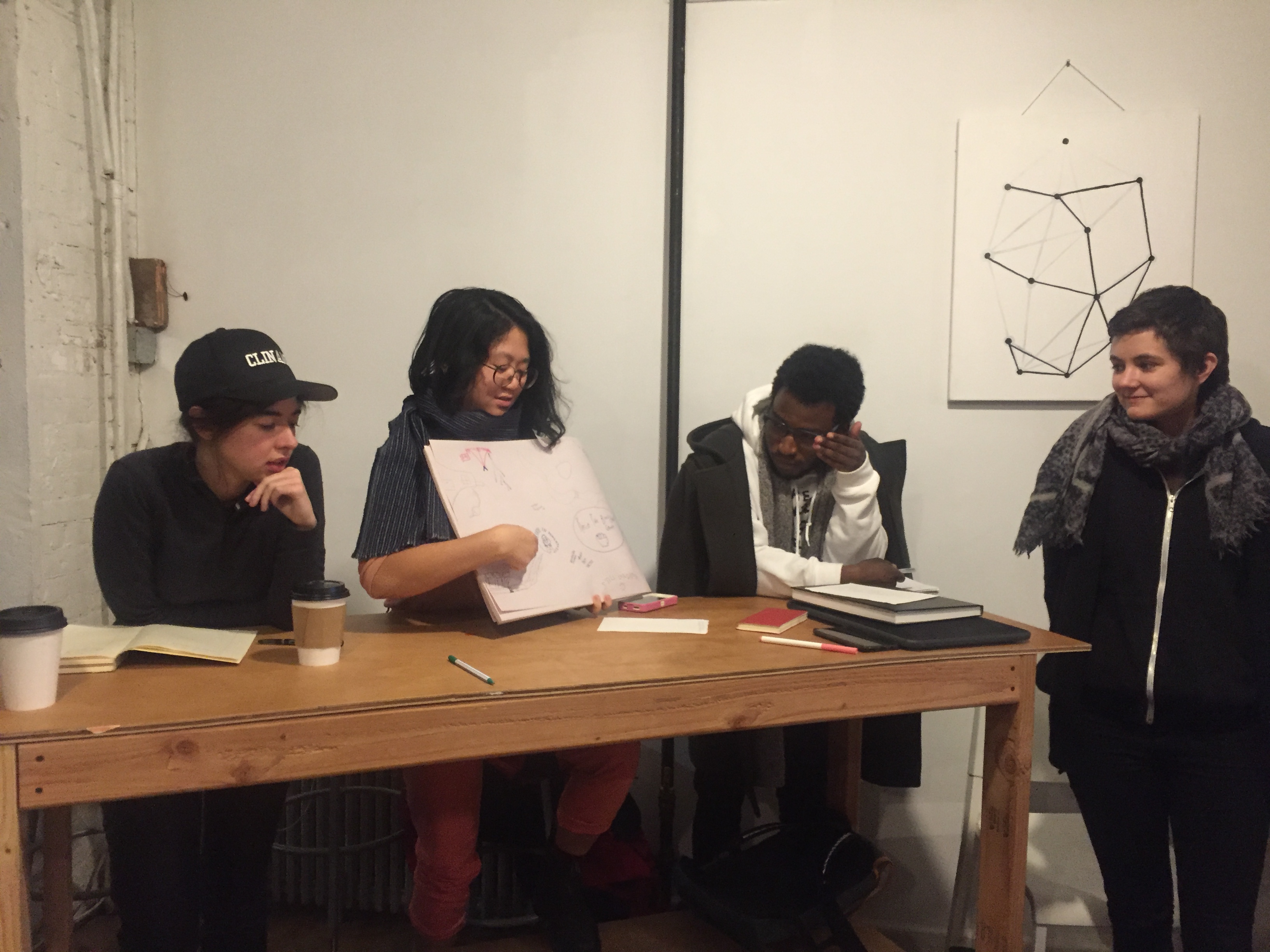 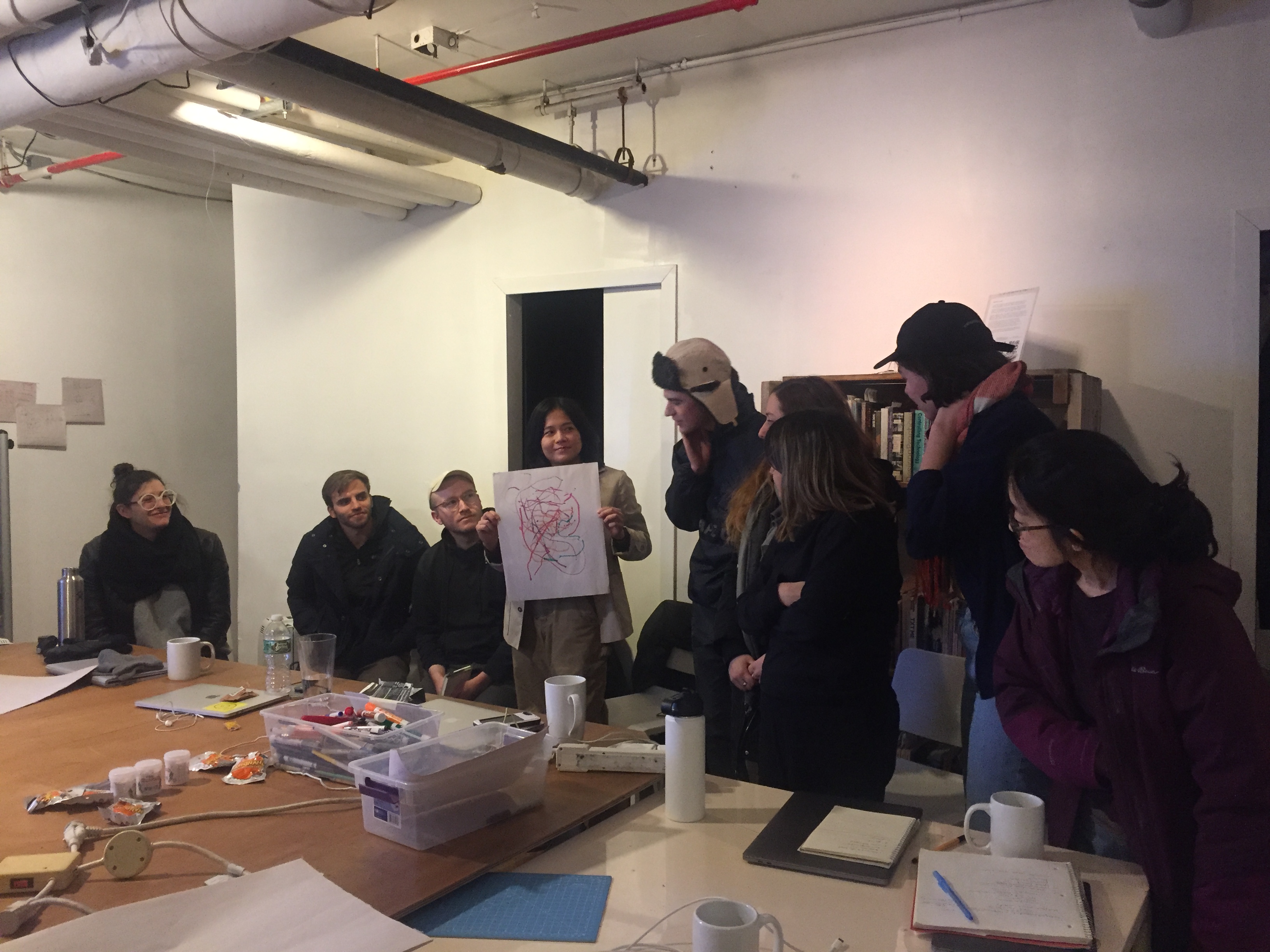