We will look in depth at Wendy Hui Kyong Chun’s theory of software as an analogy for ideology and how she traces early computational design to existing dynamics of gender, power and control. We will also read the essay Black Gooey Universe by American Artist which considers how the erasure of Blackness (both formally and racially) was significant to the development of early computer interfaces. We will look at examples of artists and artworks that operate within these modes of critique.

This class felt different from other classes in that instead of directly using computation or exploring computation as a process we deconstructed computation and it processes. By closely reading essays by Wendy Hui Kyong Chun and American Artist together we were able to discuss and break down computation, and specifically software, as an ideology.

We started the class by defining ideology through Marx. We started with definitions of the reproduction of labor and infrastructure and superstructure. We talked about determinism and Zizek’s idea of ideology as something that exists in one’s actions rather than in one’s beliefs. We talked about all of these things as a way to frame the next discussion on software. While we could have spent hours and hours on each of these theoretical frameworks it felt important to at least define each of them. We would conclude moving forward that modes of production affect infrastructure, or the economic base, and super structure, the law and the state, in a way the creates a recursive loop so that it is nearly impossible to tease the two structures apart. Infrastructure and superstructure contribute to ideology which is then projected by the ruling class and reflected by the working class so that it becomes materialized and enacted by the society in a closed loop.

From here we started to unpack Chun’s piece “On Software and the Persistence of Visual Knowledge”. There were so many takeaways from this reading that I am still processing but one that I keep playing over and over again in my head is the necessary command structure of computation. It can be understood that computation is necessarily about being in a position of power. The person using a computer always has to tell the computer to do something. There is a causal pleasure that arises when programming a computer to do something and the computer obeys each and every thing you tell it to do. Is this why Silicon Valley is always failing to account for the complexities and needs of humanity? Is this why programmers are typically unaware of the repercussions of their work? 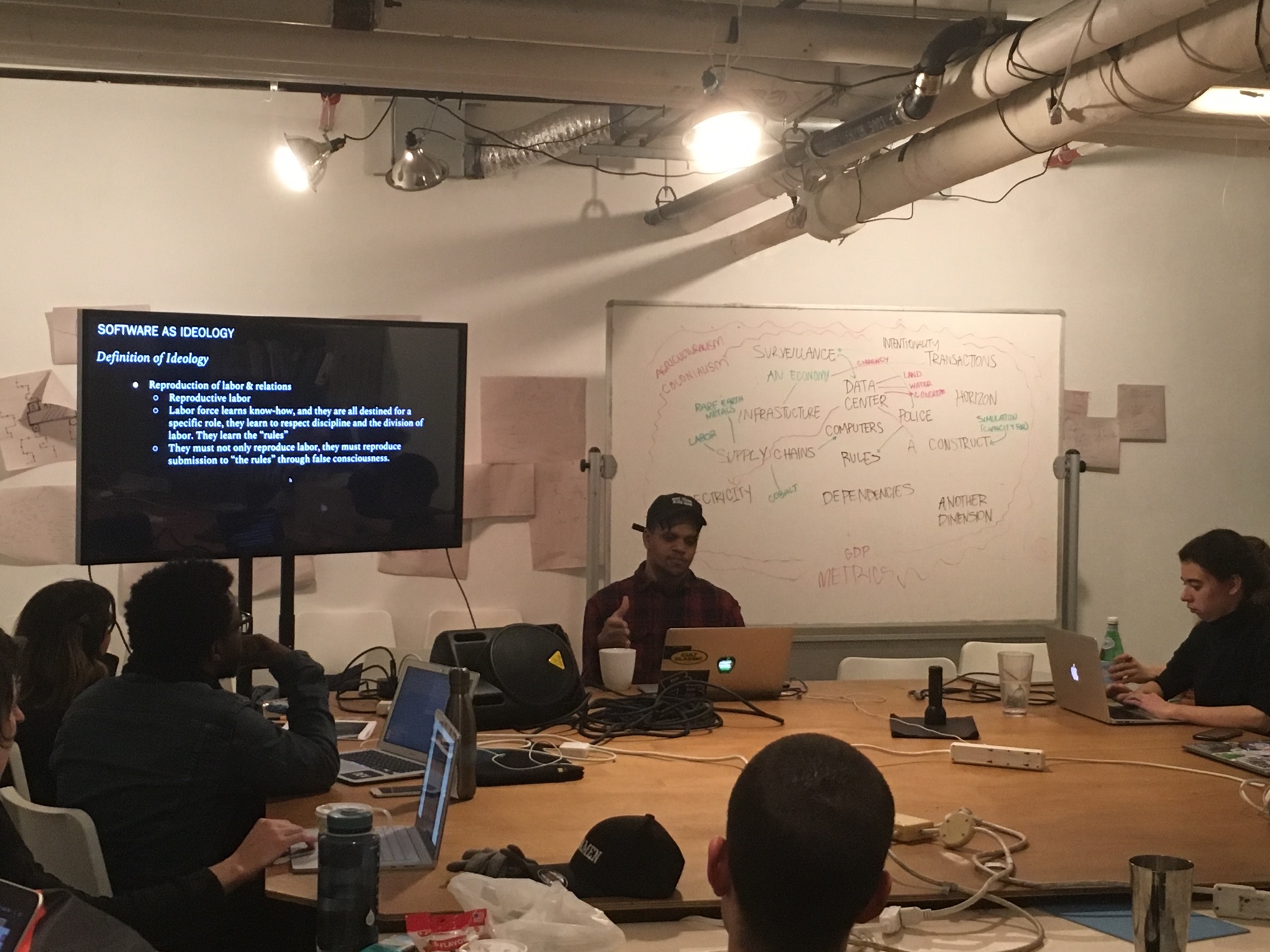 Something else I keep going back to is the erasure of women in computing. Before automated programming, where much of the computation begins to get abstracted away with the introduction of data storage, there was direct programming. This kind of programming required humans to do a lot more of the work. In order to compute something one person would feed a long problem to a computer, another person, typically a woman, would program the computer to solve the problem. As soon as computation was able to automate the mathematical and logical processes for breaking down these long problems, women started to lose their place as pioneers of early computational processes. As with so many fields, the computer science field exists with major imbalances in genders. What would computation look like had women been able to make major advancements in the field and also be remembered and respected for these advancements?

Leading up to the American’s project the Black Gooey Universe we then talked about the invention of the GUI. The invention of the GUI and the personal computer created a shift from structured programming to direct manipulation in which non-programmers who are using computers can feel the causal pleasure of commanding their computers to do things like open folders, close windows, and start applications. This is all with the help of software which can be thought of as ideology. Software heavily reduces and abstracts away the complexity of the machines that are running behind and underneath it all the while having us believe that we are the ones controlling the machines. 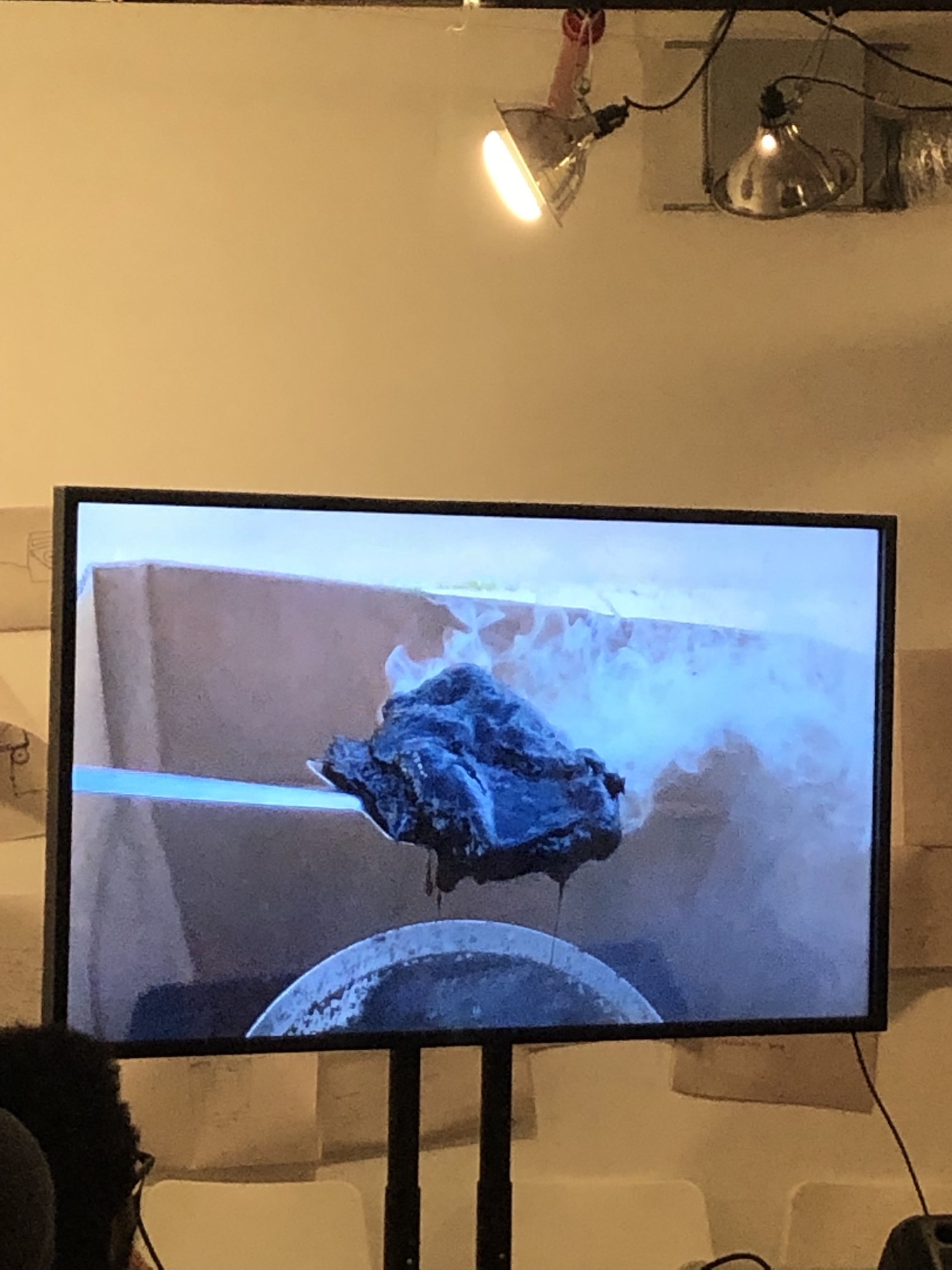 The Black Gooey Universe speaks to racial slavery as the ideological basis for the United States and is an attempt to respond to the whiteness of the screen which is now considered default and neutral. Black Gooey Universe speculates what the interface would be had blackness stayed as default. Default by the way means nothing in the context of the GUI since there is always was someone determining the “defaults” to begin with (i.e. the Apple Lisa’s all white background with black text). 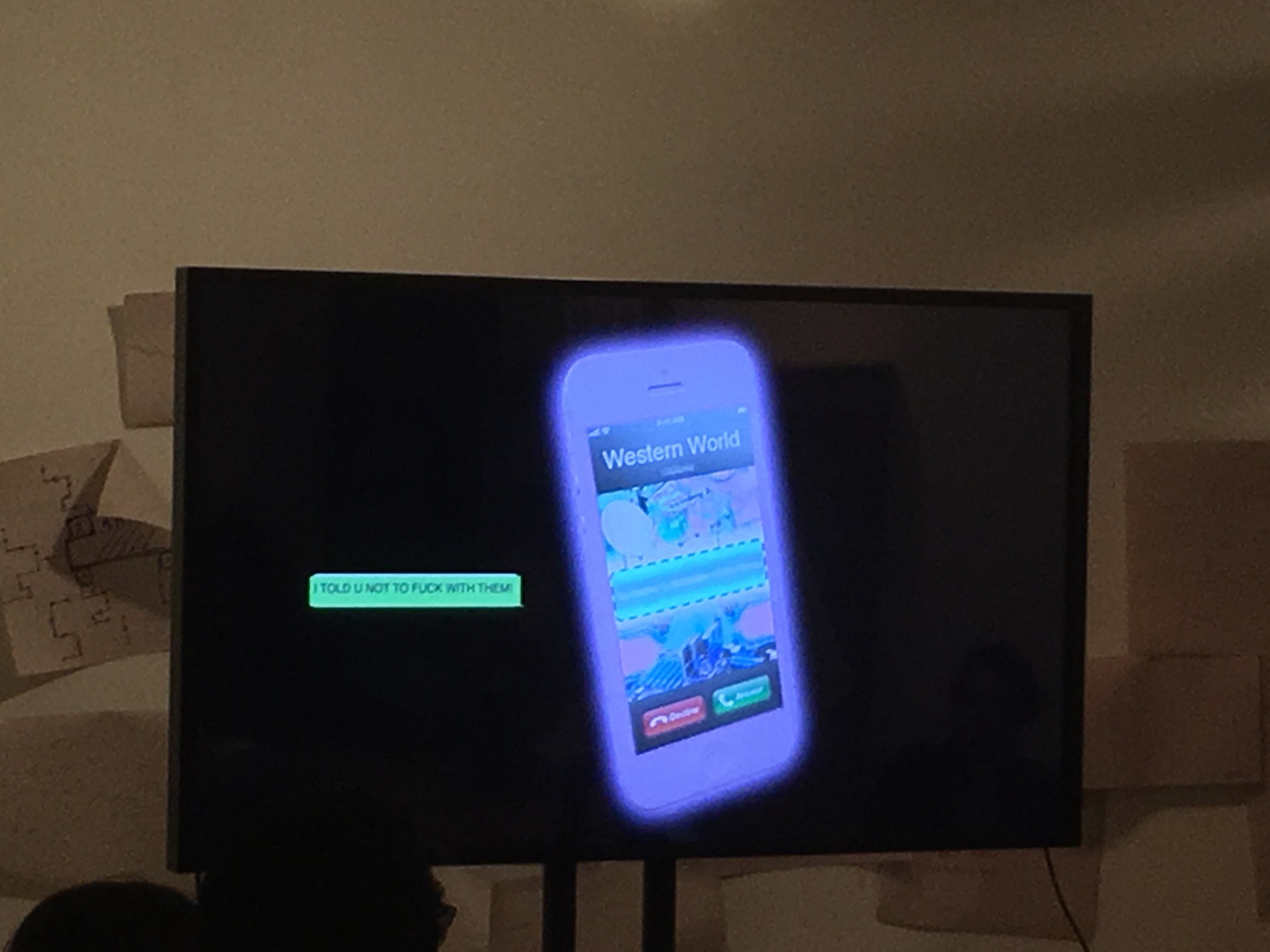 The class ended with a video screening of works by American, Sondra Perry, and Tabita Rezaire ~ all of which were amazing. I cannot wait to revisit these videos and also reacquaint myself with the ideas and readings covered in American’s class as I think it might have been one of the most important classes to me and my understanding of my own work in computing and also to the larger conversation around computation and its origins.