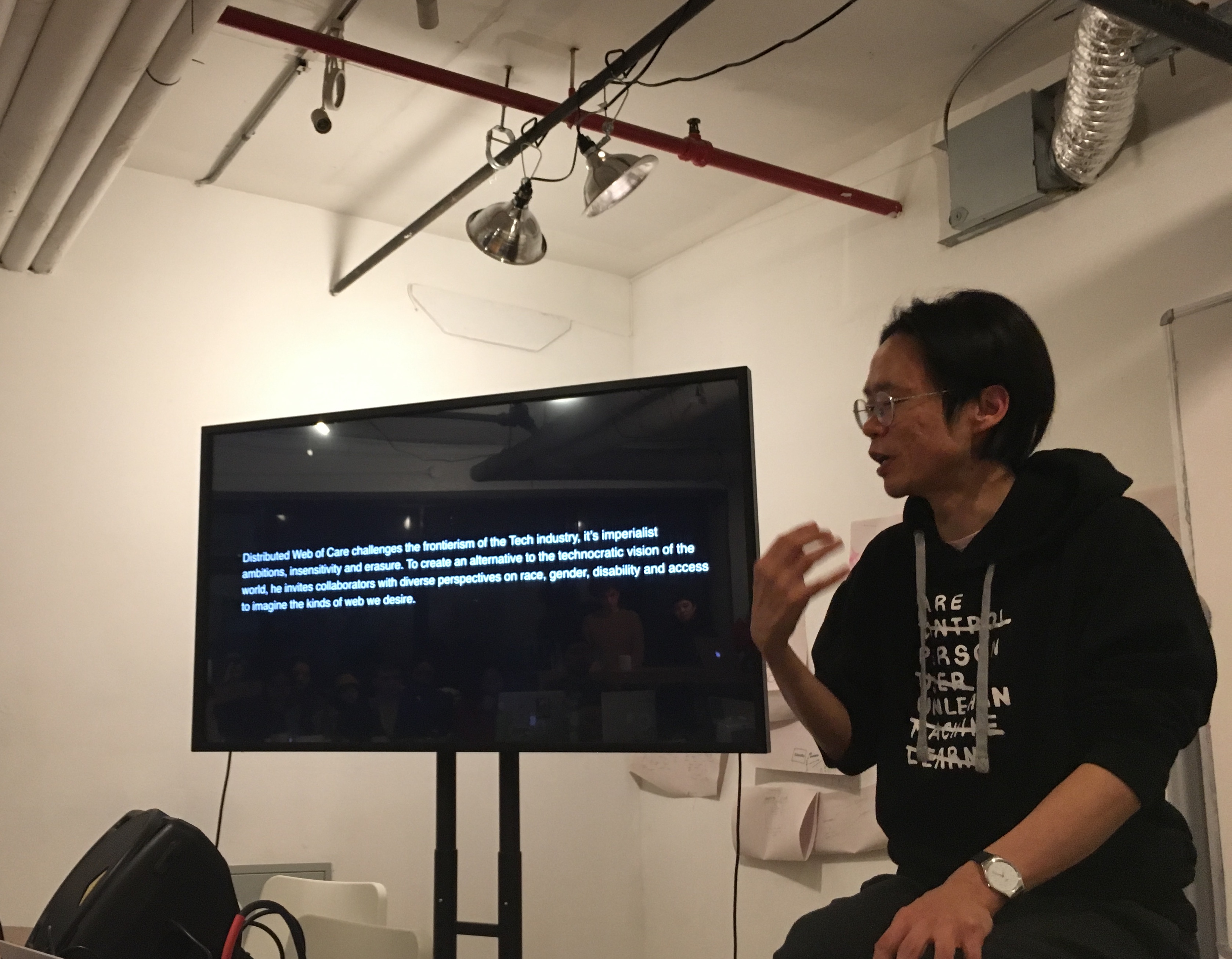 Taeyoon Choi is the computer lab instructor I wish I had. Maybe if my introduction to computers and the internet were not so simplistic and focused on hardware, maybe the way I navigate our digital world today would be drastically different.

Most of today’s computation is done on the cloud. Through plastering this clumsy cute cloud over their vast centralized networks, technologies like Google and Amazon Web Services (AWS) have abstracted infrastructural problems into logistical problems. Try to think about this materializing like physical infrastructure where AWS is like the Department of Transportation and to access the Internet “city” you need to get on these “highways” that have been conveniently laid out for you by Amazon. Taking this as the norm, you focus on how computing problems have to do with logistics–how to get on the “highway” and possible traffic issues that come with using it. You don’t question whether the fact that computing being dominated by these “highways” is the real infrastructural problem and instead focus on logistical problems.

For the first time, I was being asked what kind of space I wanted the Internet to be. Taeyoon prompted us to think about not simply decentralizing networks, but taking a step further to weave a distributed web of care. Here the word “care” pays particular attention to affect, where we take care of each other and the notion of intention trumps control. The word “distributed” was inspired by feminist writer Jo Freeman, who advocated for the distribution of authority among as many people as reasonably possible as a way to counter authoritarian structures. 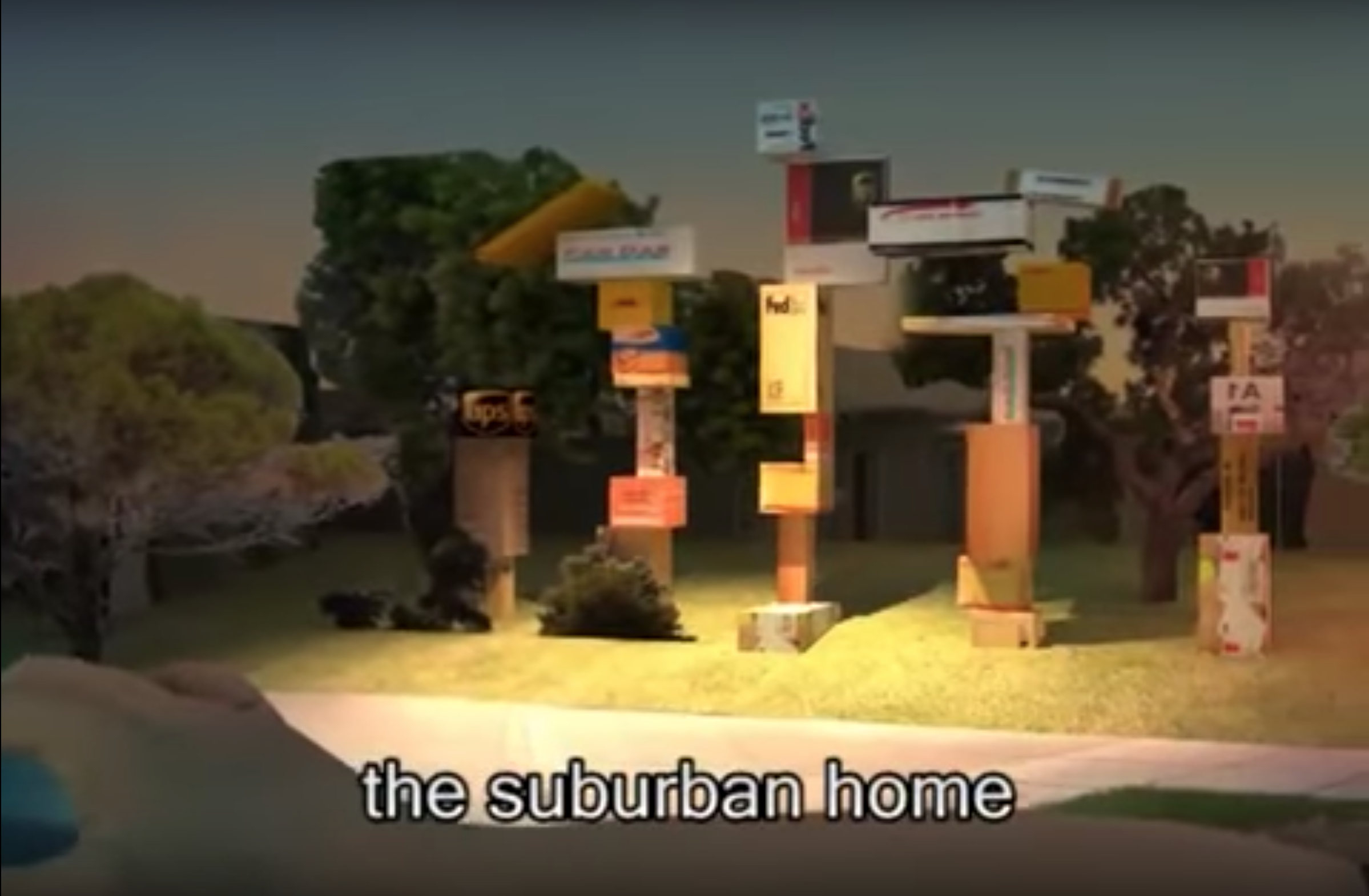 Further elaborating on authoritatrian structures, Taeyoon contrasted Foucault’s panopticon with Deleuze’s societies of control. He argued that control in the Internet is not in the form of a central omnipresent watchtower, but instead a less obvious, more insidious form of control. Put simply the cloud is not an amorphous wisp in the sky, it is a constructed centralized network, and the centralized network gives you the illusion of freedom when really you are tracked wherever you go. Taeyoon called on us to challenge the frontierism espoused by Internet pioneers like like cowboy and Electronic Frontier Foundation founder John Perry Barlow with thinkers like Safiya Umoja Noble and Jessica Lynne in reimagining the internet as a non-binary space. How can we use code to empower our communities?

We all huddled in a room next door. The light was dim as Taeyoon held a spool of pink neon string to involve our physical bodies in a participatory exercise he had also facilitated at Decentralized Web Summit. It was this activity that had the most impact on me. As someone who was relatively new to code, I could follow the concepts and conversations in class but had difficulty intuitively understanding what all these ideas meant for me. Through this activity I gained a much deeper level of understanding that could not be verbalized. 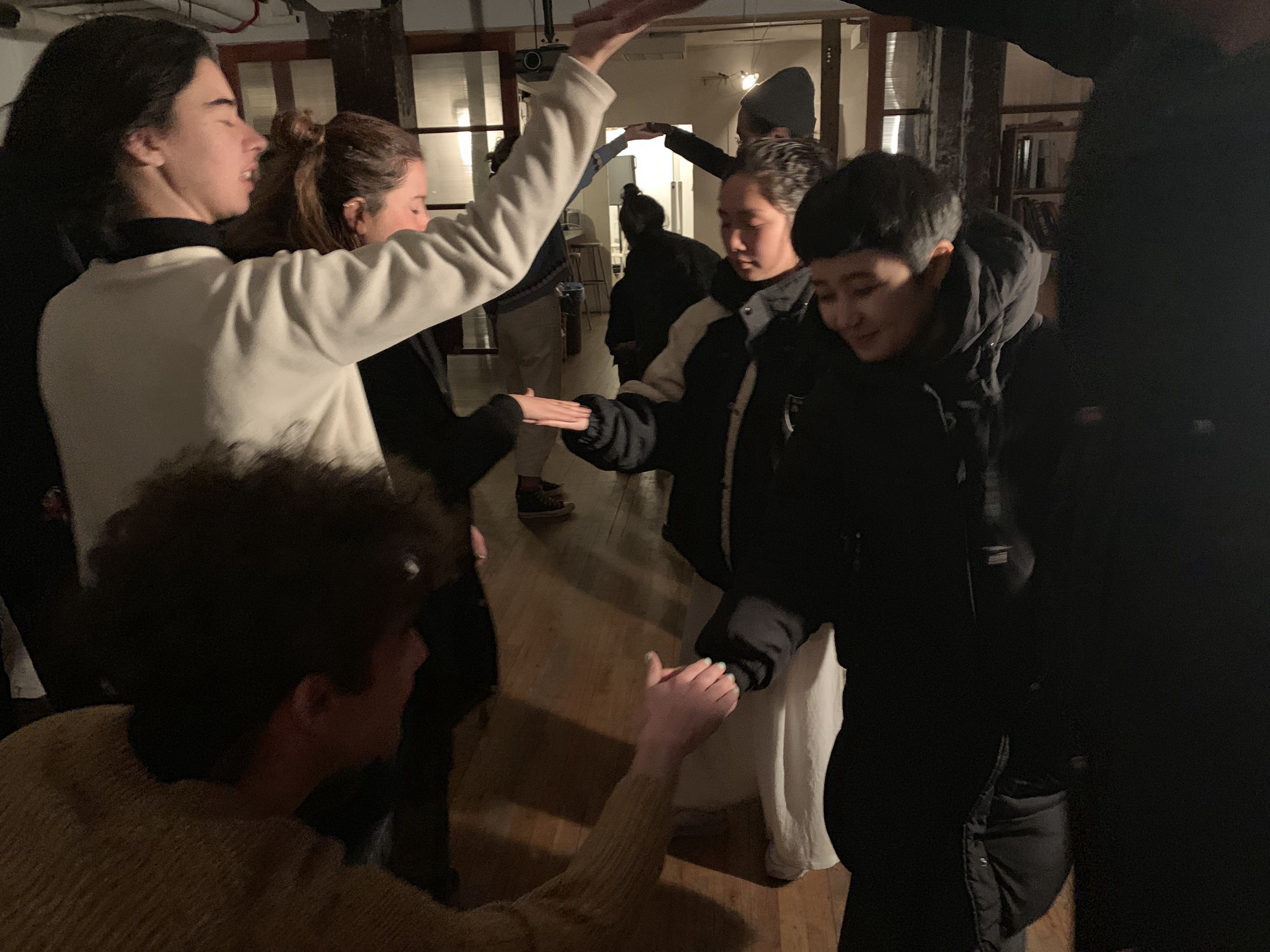 To reenact this activity you will need: 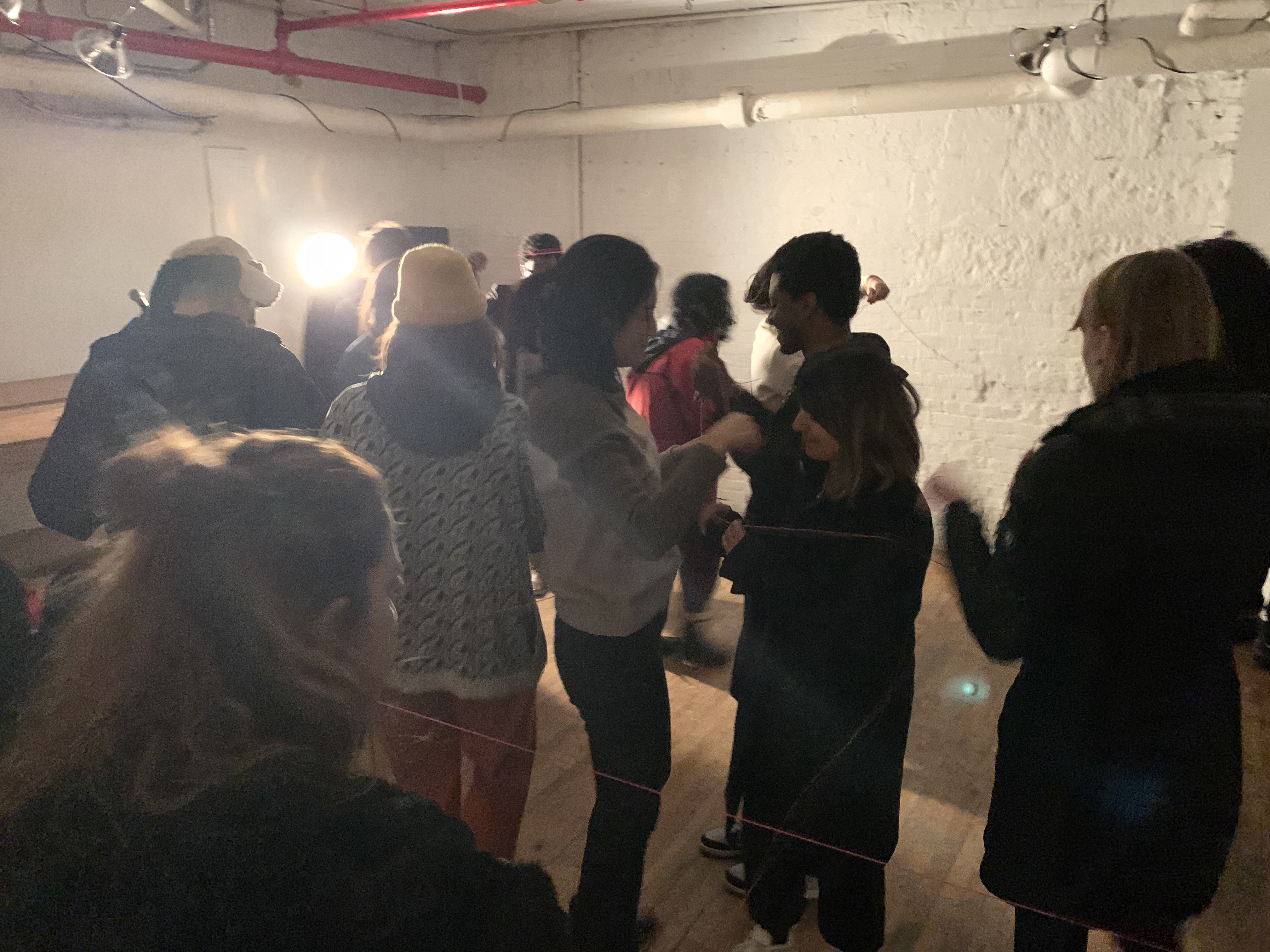 Going through this activity required me to embody and act through networks and trust I take for granted on a daily basis. For how much I hate capitalism and corporations like Amazon Web Services and Google, it’s baffling how long it has taken me to recognize that the Internet is largely made up of centralized networks and consider alternate possibilities for the architecture of the Internet.

Code of conduct might be more important than Code itself. - Taeyoon

Following Taeyoon’s ethos, we thought about how rather than a loud manifesto, we could form codes of conduct that would empower others through engagement and a space for learning. Our last activity in class was to distribute our code and code of conduct as zines published with Dat, a decentralized alternative in an effort to build a different kind of web. 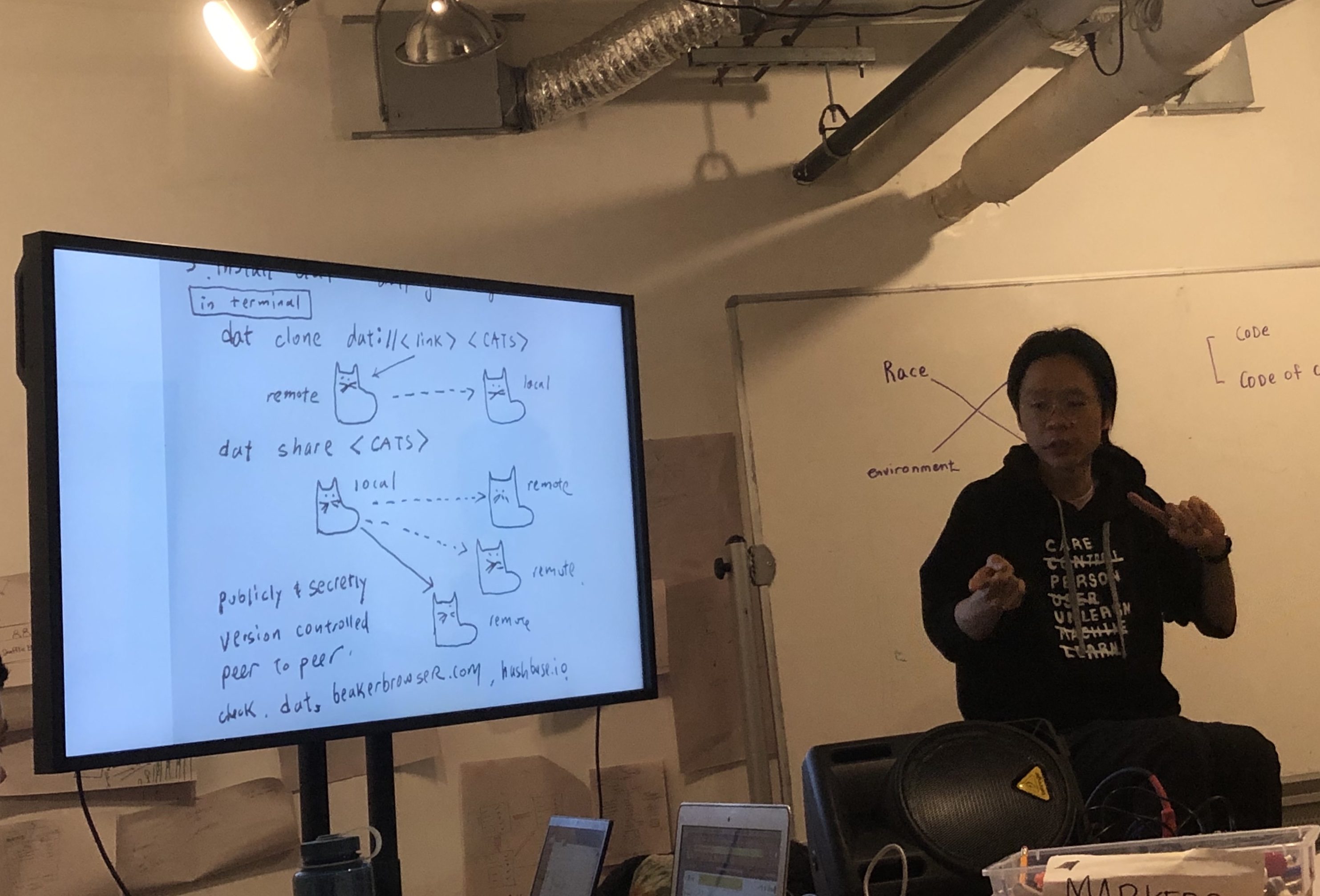 It was amazing to consider a position of consideration and care in publishing something on the web, when a good chunk of my interactions on the web have been with misogynists and unrelenting Russian bots. I strongly encourage readers to look through the specifics of the activity, and browse through our beautiful archive that just might empower you with a sense of care and optimism we needed yesterday.