We prioritize certain behaviors curated by social programming, whether by poetry or by survival. Through dissecting Fluct’s latest work ‘everythingmakesmehappy.’, we will discuss the processes used to create performance aimed at exposing and ultimately interrupting the psychology of social programming. With fluid interruption, responsive support and acute presence, we are aiming to disable oppressive structures in order to become the authors of our existence.

I feel like I need to preface this blog post by saying that I’m still not sure about what I saw or what it did to me, but I know that I’m different after seeing FlucT’s performance. This experience was comparable to is reading a book that jars me ideologically, changes my conception of possibility, gives me a new framework for approaching the experience of being a person with a body in a place. But unlike a book that I can take my time with and process along the way, FlucT’s performance happens in a 25 minute deluge of sounds and movements - bodies in communion in ways that I’ve never seen bodies in communion.

FlucT is a performance collaborative created by Sigrid Lauren & Monica Mirabile. Their work prods at the tensions of capital obedience in American culture through choreography and performance. They’ve performed at techno festivals, gallery spaces, art fairs, and now, for Code Societies students in a dance studio around the corner from SFPC. The experience, holistically, was incredibly cinematic - imagine sitting in a historic dance studio right by Hudson River Park facing a beautiful view of the southern Manhatten skyline and seeing an experimental performance collaborative do things with their bodies that you have never seen people do with their bodies to a dissonant soundtrack of athleisure ads, techno music, samples from America’s Got Talent, and unidentifiable noise. 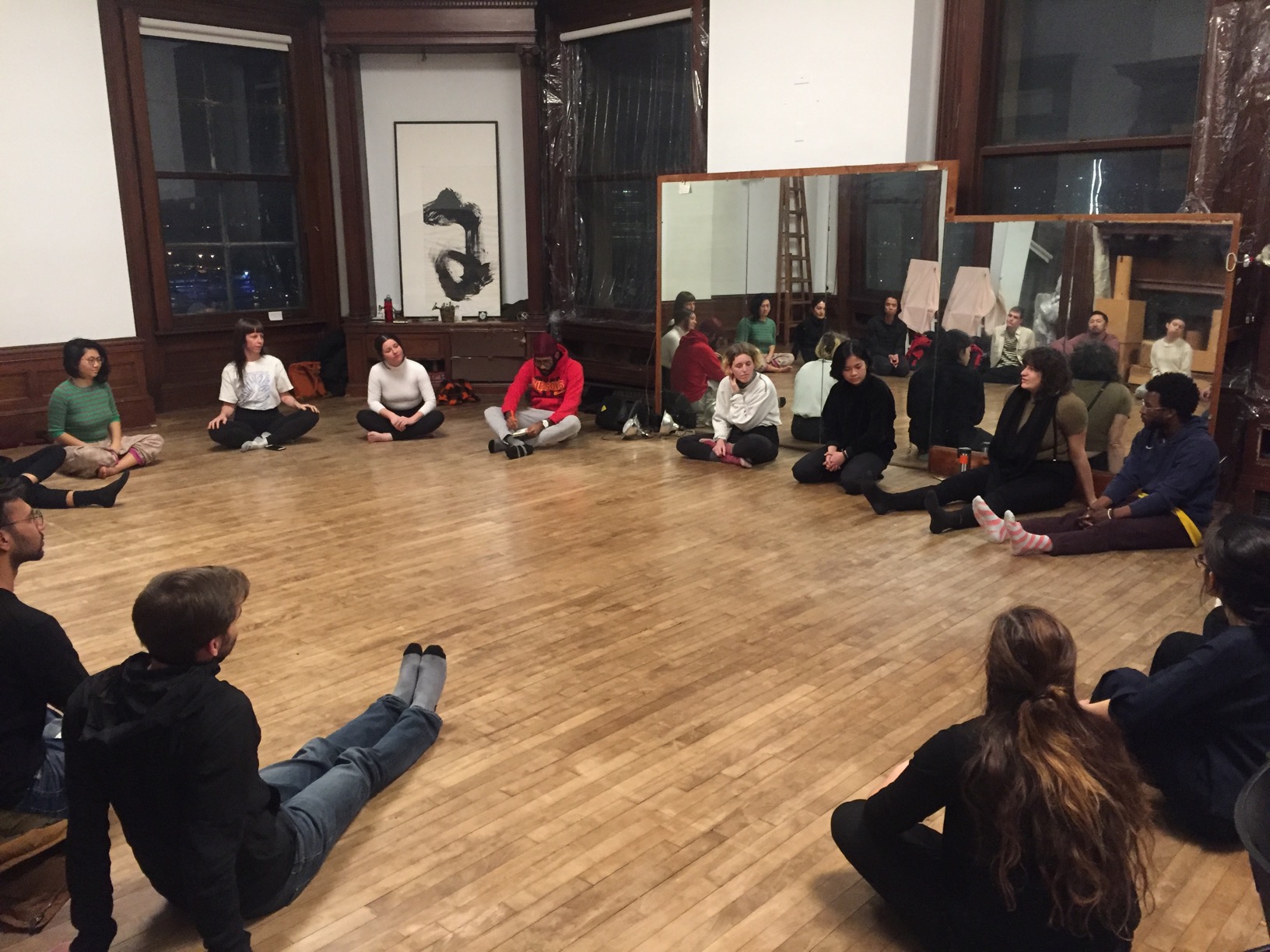 FlucT started their class with a workshop that was really more of an invitation - an invitation to actively recognize and engage in the ways that our bodies are existing in relation to one another. In pairs, we mimicked the movements of our partner while maintaining eye contact for the entire duration. I want to say that we did it for five minutes, but my conceptualization of time collapsed at some point. There were moments where it felt entirely too long, excruciating even, and moments where I never wanted it to end. Have you ever looked into someone’s eyes for so long that you lost track of time? I know it sounds lame, but bear with me - it’s my truth. It is hard to look at someone in the eyes for that long and not have affection for them. There’s a level of intimacy to learning the motions and limitations of another person’s corporeal form: whether they are comfortable stretching at a certain angle, how their shoulders come together as they lift their arms above their head. There was never a verbal acknowledgment of who would lead when or who would follow. We all silently consigned to have control or to be controlled.

Following this activity FlucT left the room to prepare for their performance and the lights in the studio were turned off. In hindsight, this was really where the performance began for me. The darkness felt like another invitation - an invitation to dump any sensorial baggage that I’d entered the room with so that I could be open to whatever I was about to see and hear and feel. 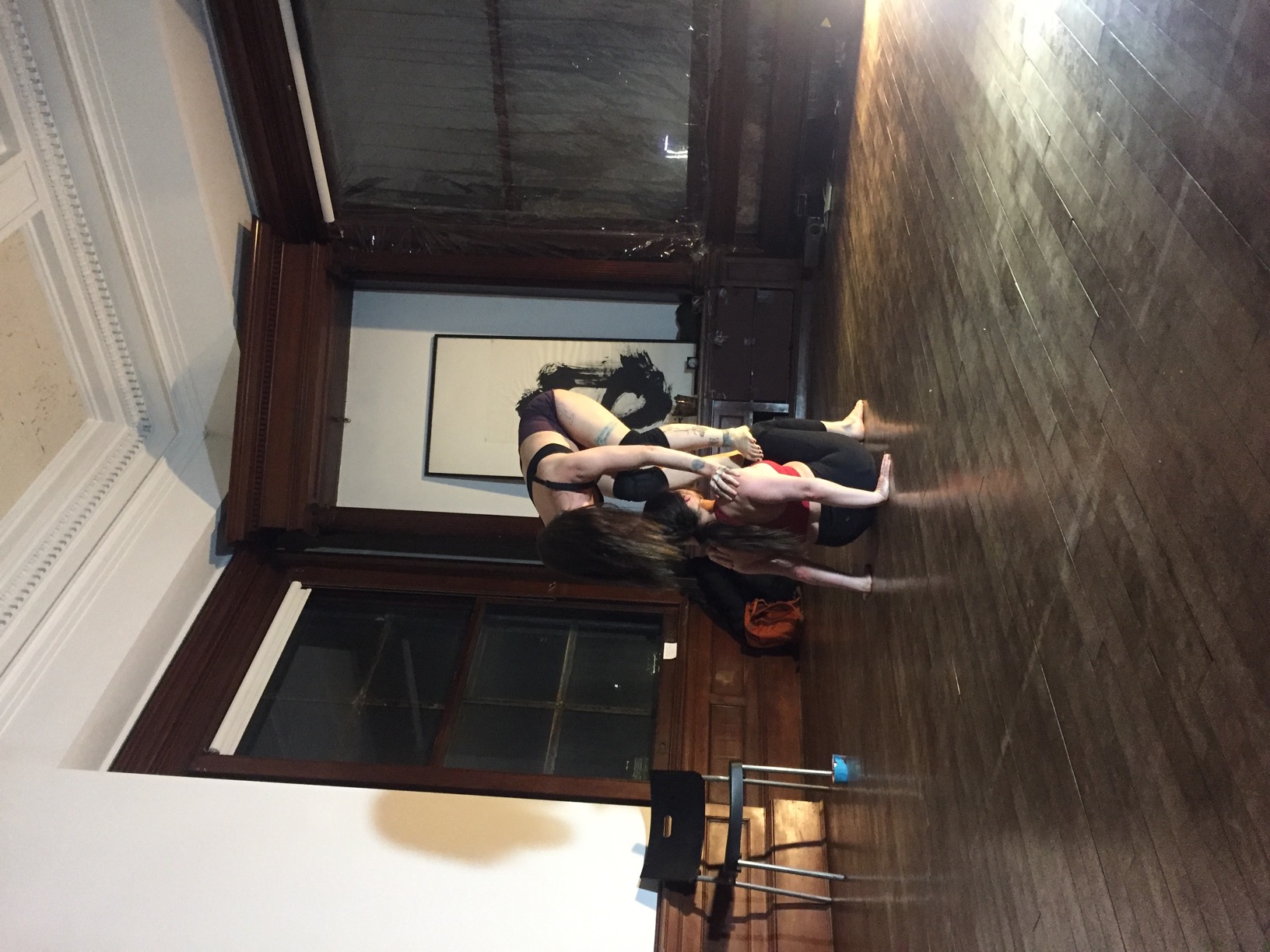 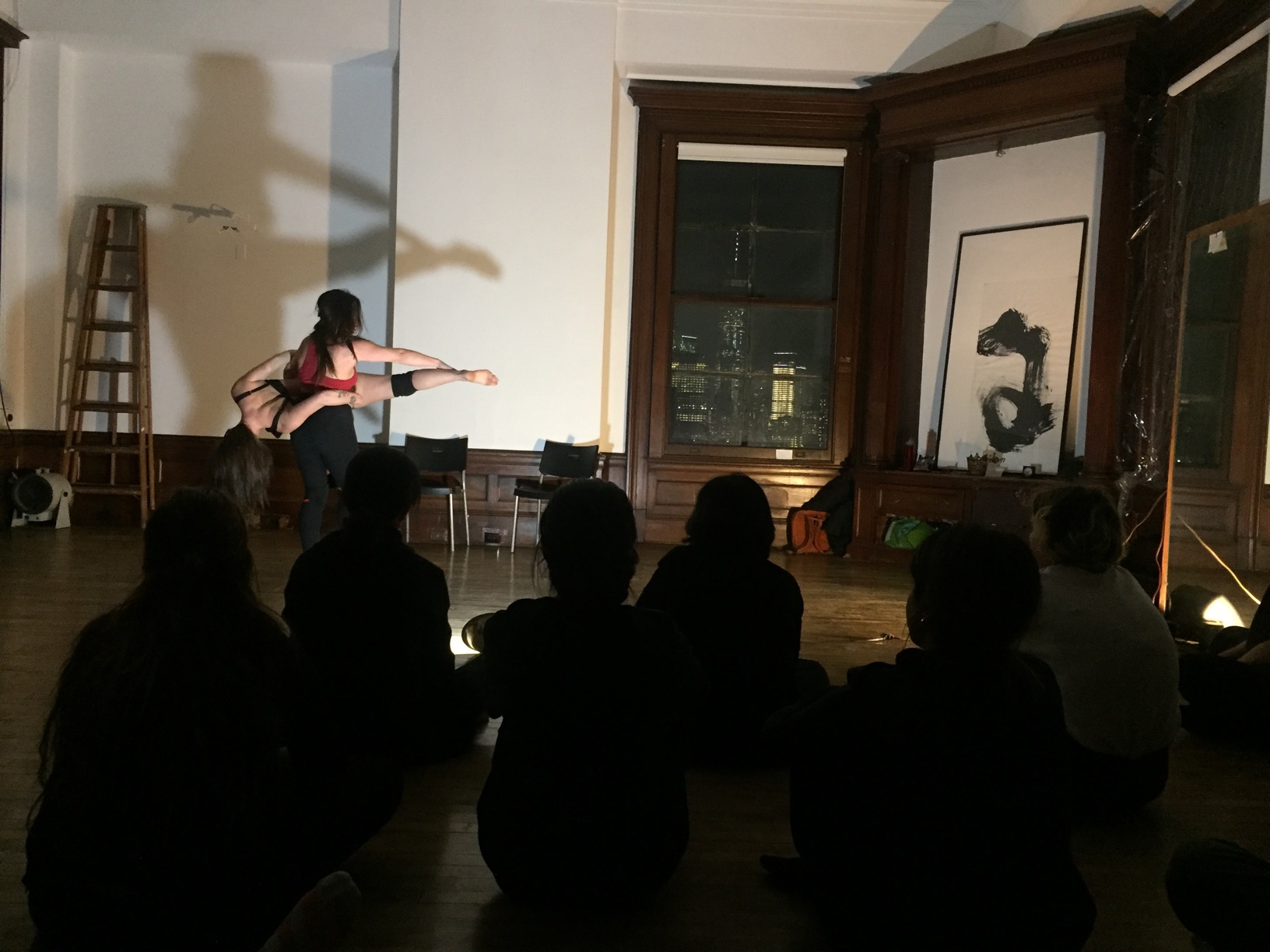 The conceptual sections of their performance break down as follows: 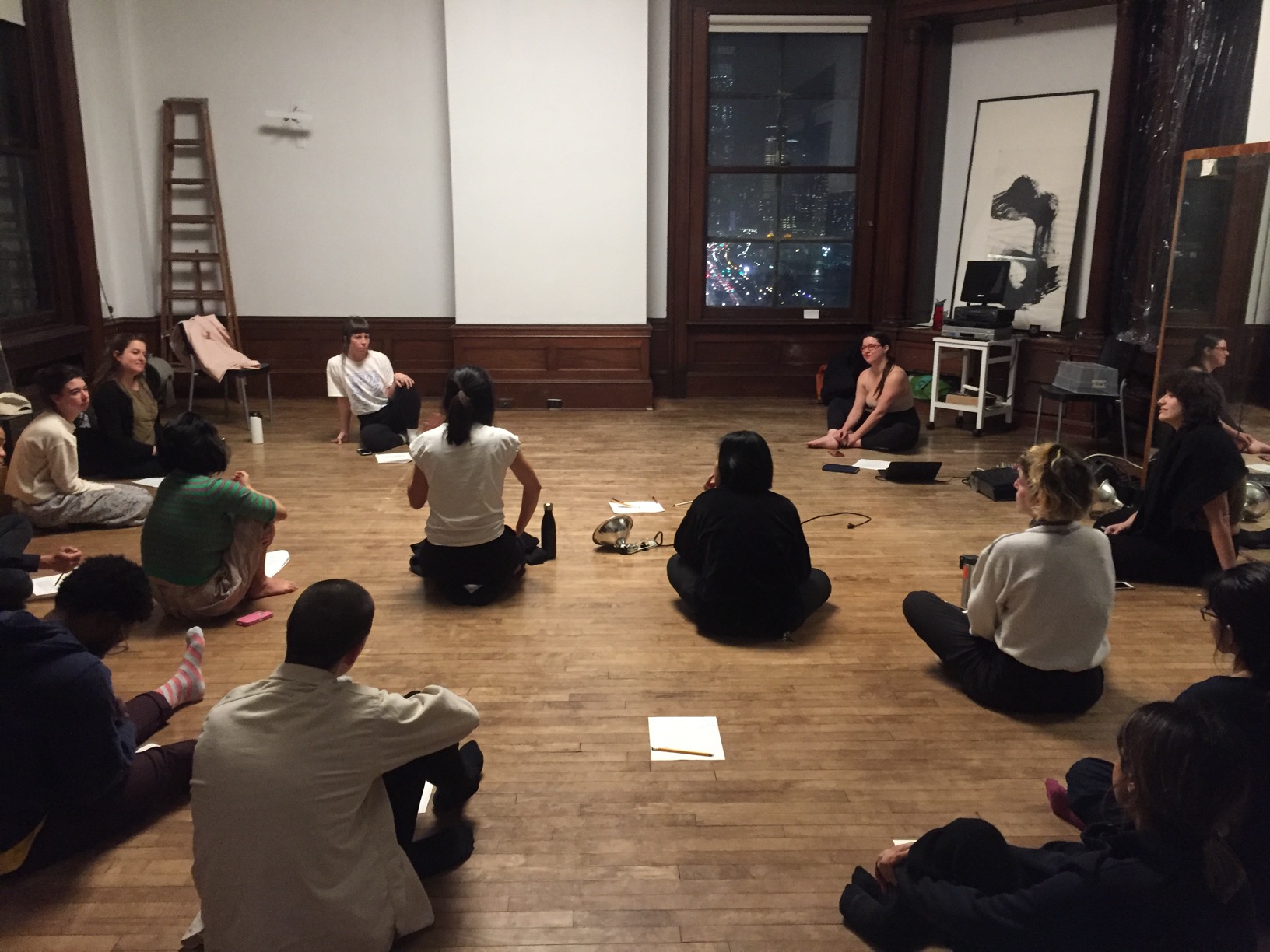 After their performance, we sat together and tried to collectively process what we’d just seen and how it made us feel. I realize this is a very feeling heavy blog post. Some moments were identifiably messed up. In the first act of their performance, Monica dragged Sigrid, face down butt up, by the arm from the back of the room to the front. This was hard to watch. My brain associates this kind motion with things that cannot be consented to - like a true crime re-enactment where the killer drags a body into his garage for disposal or hacking apart. The person being dragged cannot consent to this because they are dead, violence is the necessary precondition to this movement, and this is the only thing I can think to compare it to. Our reflection was characterized by confusion, perhaps a little dismay, and silences when none of us could seem to find any words.

FlucT ended our experience together with one final invitation - we were to walk the dance studio to the sounds of Lotic’s Love and Light. We started slowly, adjusting to moving again after sitting for so long, but more quickly as we resettled into ourselves. It began to feel almost like a ritual or a dance. At the end of the song we formed a circle with our back to one another and extended the palm of our right hands onto the back of the person in front of us. In this position, we stood and felt one another breathe.

I don’t have the words to describe this feeling to you, reader, or at least not in a way that I feel comfortable sharing in a blog post that just anyone can read, but it was very beautiful. I felt intensely fortunate to have been able to experience it. I hope that you get to see FlucT perform someday (if you haven’t already), and that you are gentle with yourself afterward - accommodating in the space you allot to reflect, digest, absorb.