Following the discussions we had last class surrounding terraforming, we were each tasked with selecting artifacts that we would want to “show someone living in a far-future terraformed outer planet in order to explain the patterns and conditions that produced the Earth that their ancestors chose to leave.” Gleaning everything from dandelions to the Salton Sea, we gave short presentations on our artifacts in class that culminated in printed in a newsletter we gave out at the concluding Code Societies Winter 2019 Showcase entitled Lessons for the Terraformed. 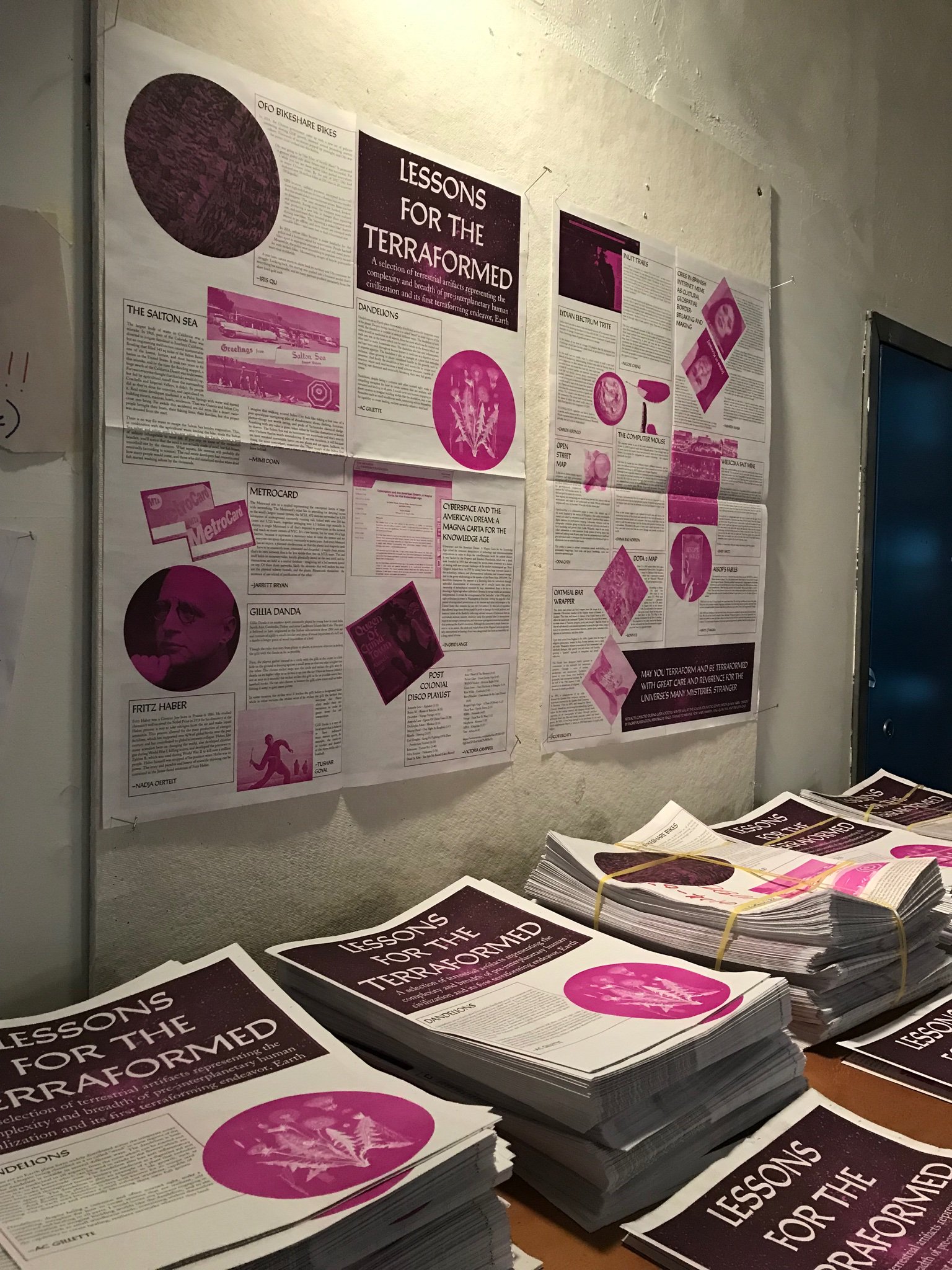 Fritz Haber was a chemist who won the Nobel Prize for the Haber-Bosch Process– a process to synthesize ammonia (liquid) from the nitrogen in the air. While responsible for a chemical process that feeds close to half of the global population through its use in fertilizer, Haber was also known as the “father of chemical warfare” with the weaponizing of chlorine and other poisonous gases in World War I. He also contributed to Zyklon B, which Germans used to kill over a million people but was ironically forced out of research due to being Jewish. He died penniless and alone. 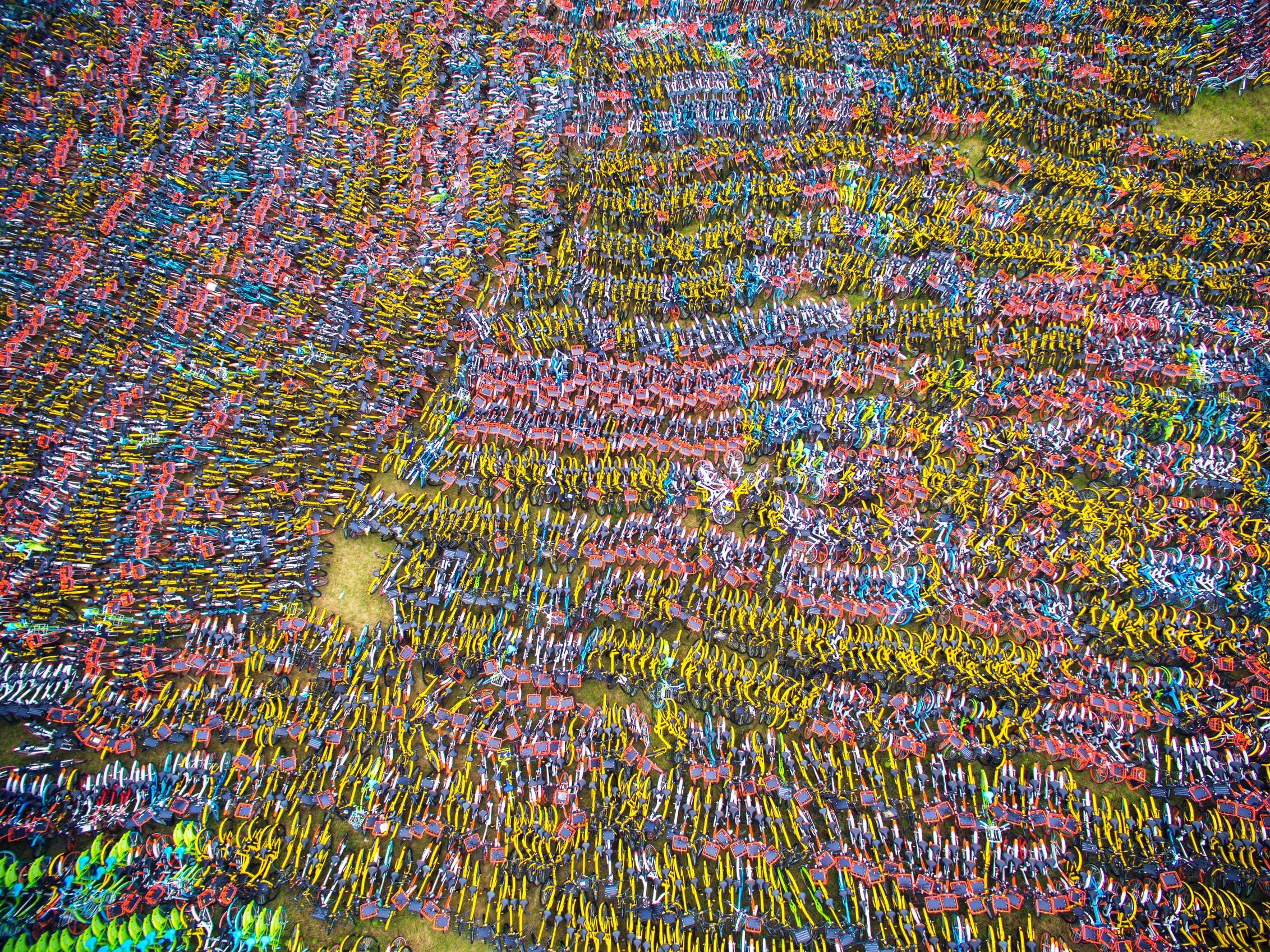 These arresting photographs of colorful bike fields captured these vast bike graveyards that are now a common sight in major metropolitan areas in China like Beijing and Shanghai. As a result of the Chinese government providing large subsidies to promote startup culture in the nation, bike-sharing companies like OFO started popping up. What began as an environmental mission however, turned on its head when the company found that it was much easier to order new bikes than to repair damaged or find stolen ones. While companies like OFO are scaling back, these mesmerizing bike fields continue to exist as a reminder of the immense waste that can come with startup culture.

A clumsy rendition of a very sophisticated Inuit conception of time and space. The atlas was proposed to set itself apart from other studies because of its reliance on geospatial data (of which there is not as much as other illegible Inuit cultural resources). With the increasingly contentious arctic, the idea was that this static atlas would show Inuit historical presence in a relevant and significant way – through lines on a map.

Ingrid Lange: Cyberspace and the American Dream: A Magna Carta for the Knowledge Age

This essaycalled for extensive deregulation of US tech companies. It was authored by four – one beloved by Reagan, economist who morally denigrates poor people; Reagan’s science advisor who was on HP’s board; a writer; and an angel investor in health and space travel startups. It discusses the internet as a liberatory space through private ownership by giant international firms. The paper is hosted on the “Progress and Freedom Foundation” website, a 90s era pro-trickle down economics think tank created by funds raised by Newt Gingrich from tech, tobacco and pharma companies.

As an alternative to systems like “smart cities” that threaten to extend the power of big tech companies with the ability to directly control the development and planning of our neighborhoods. given the political nature of maps, there is something to be said about platforms like OpenStreetMap, whose goal it is to create an editable and free map of the world. Examples of using open data from it to map include wheelchair accessibility and drinking water fountains in California.

In 2008 Logitech made their billionth mouse. We can think of the mouse as extension of the body, where our clicks manifest as desire. It is a non-phallic means to navigate a screen. While sometimes claimed to be a dying technology, the act of clicking and moving around the screen continues to mediate our relationships to the computer, and hence serves as a mediator of already mediated experiences between humans through computers. 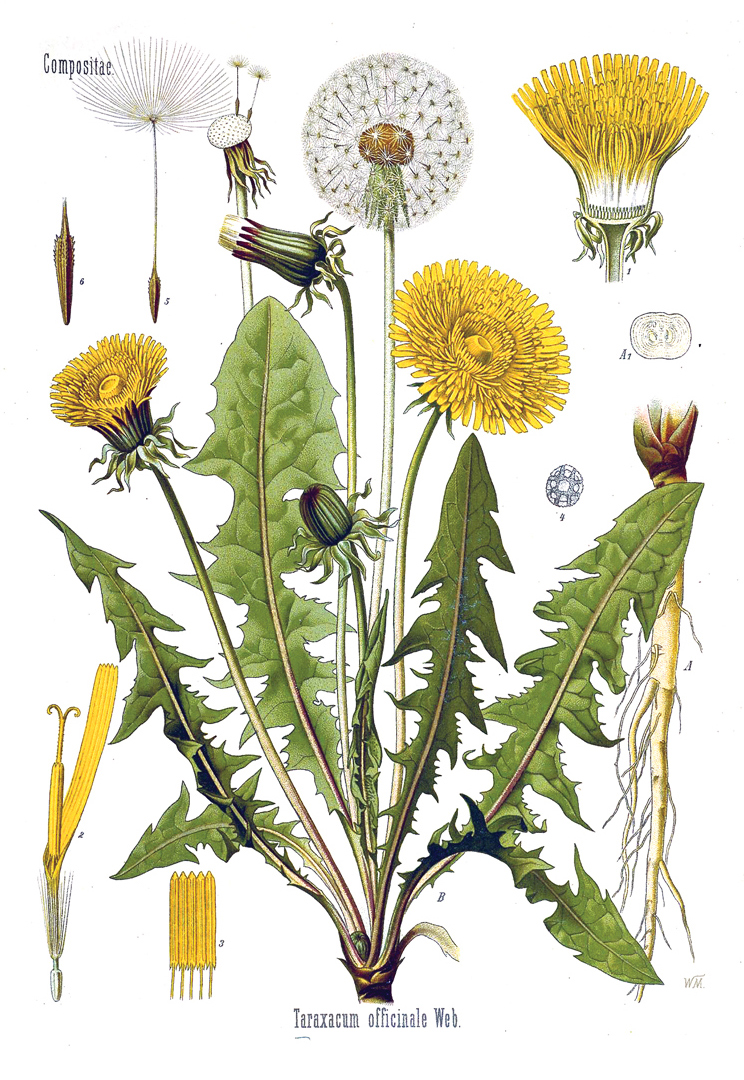 Some consider it a “weed”, a subjective or relational category. They grow everywhere. Every part of it is both edible and healing, admitting various preparations, from salad to tea and more. The dandelion serves as an embodiment of resilience and healing – each seed as a self-contained system.

It is the largest body of water in California. It was also a mistake. In 1905, engineers were trying to divert part of the Colorado River to irrigate an important agricultural area, the Imperial Valley. Flooding caused water to enter the Salton Basin, a very low and hot area. This lake was expected for years to dry up, but continued being fed by agricultural runoff. It was marketed as “the new Palm Springs” and marinas, hotels, etc. were built, spawning Salton City. However, this was unsuccessful for many reasons, primarily caused because the Salton Sea lacked ecological symbiosis; only evaporation can let water escape. Combined with pollution, it became more and more salty, eventually outstripping the Pacific Ocean and becoming inhospitable to most life. The sand is actually pulverized dead fish bones. Today, most of Salton City is abandoned, but the population has increased from 2000-2010 due to the California housing market, and artists’ enchantment with the aesthetic.

The word Quaker comes from the “Society of Friends” religious society dating from the 1600s. There is little apparent connection of the Quaker Oats bar to the religious community beyond a few individuals. Quaker is now owned by PepsiCo, and owns Gatorade.

Postcolonial Playlist hits: disco with an oriental twist. 24 songs that tell us something about imperialism. The importance of the arena in disco has a relationship to terraforming as world-building. Disco is an anti-imperialist genre.

Networked terraforming can be thought of in relation to the subway, where we have carved out a network with stations as nodes. The metrocard is a synedoche of the NYC transit system. Metrocards were introduced in 1993. Magnetic strip encodes the balance; details about fares and transfers. Remote data goes to a fare collection database which provides the city with ridership and other metrics. The plan is to replace the current metrocard with contactless cards starting very soon, with transition to complete in 2021.

Aesop’s Fables was chosen as an artifact of storytelling, that served as a way to convey societal values. The student presenting the project reasoned that terraforming has been a result of us using Aesop’s code of ethics for a long time. This formed a basis for why we left Earth and do terraforming: to find other societies with different ethics and learn from them. 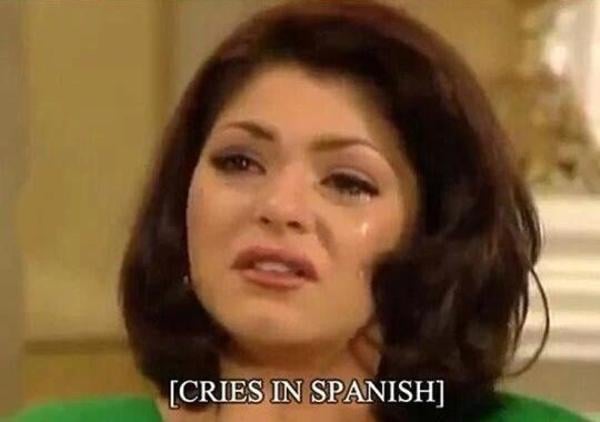 [cries in Spanish] internet meme is culturally geospatial border-breaking and making. It has origins from a Reddit commenter. Memes lend themselves to decontextualization and reinterpretation and can serve as transnational phenomena as seen with the creation of the [cries in Kuwaiti] meme. 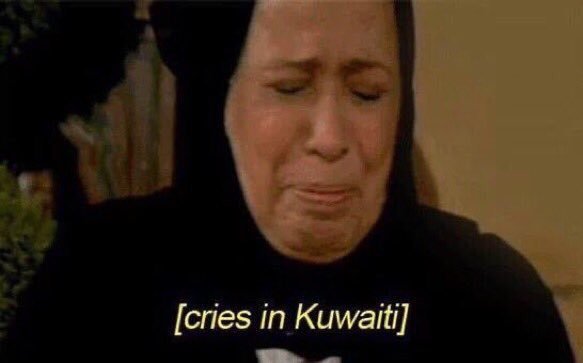 Gili Danda is an amateur sport popular on the streets of New Delhi. It is played by placing the gili (a small piece of wood) on the ground and hitting with the danda, a stick. There are many variations as to how you win the game: distance traveled by the danda; speed of fetching; number of times hit to keep it up in the air. This served as an example of terraforming through play rather than intention.

Lydian electrum trite is considered among the earliest examples of coinage and believed to exist to facilitate transaction over a barter system. Present day apps like Venmo are examples of transactions that are anti-barter due to their seemingly instantaneous nature.