Katrina grew up in San Francisco and developed a large passion for electronic music production in high school. She studied Studio Art and Film & Media Studies at Whitman College in Walla Walla, WA a small town known for its sweet onions and state penitentiary. At Whitman she played tennis for 3 years until she tore her ACL and meniscus in two places at the end of junior year. The injury and the grieving that came with it led to a deeper self reflection of her body and the gestures associated with the movement and identity of bodies in general. This experience greatly influenced the production of her senior thesis installation - a combination of multimedia, performance, and vinyl cuts - which reflected on the implications of her own body and the performance of identity through gestures using the GIF as a form of narrative. Now settling into New York she’s been working with art collective and gallery space Babycastles where she’s been inspired and challenged to explore and learn more about DIY video game culture and interactive play. 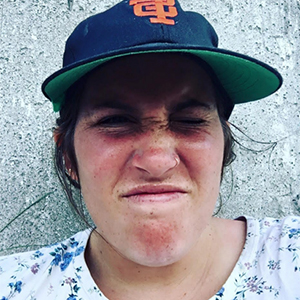